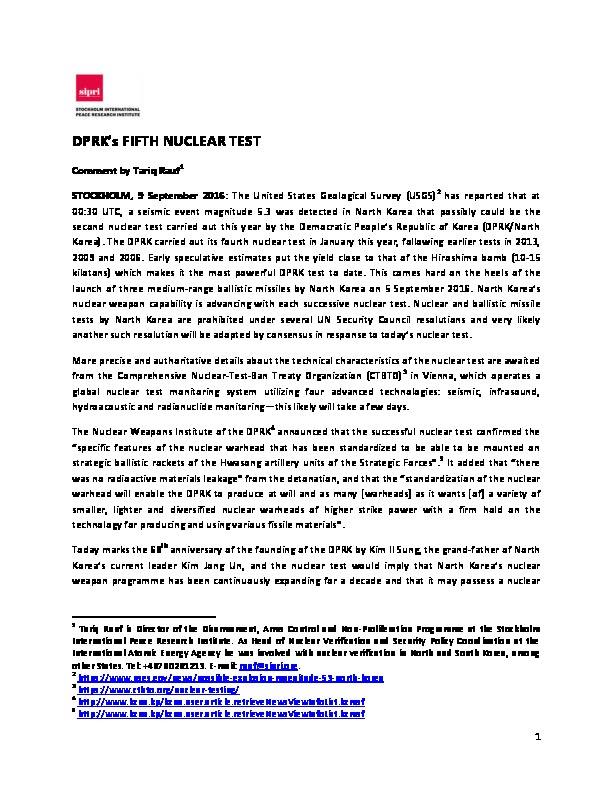 Stockholm, 9 September 2016: The United States Geological Survey (USGS) has reported that at 00:30 UTC, a seismic event magnitude 5.3 was detected in North Korea that possibly could be the second nuclear test carried out this year by the Democratic People’s Republic of Korea (DPRK/North Korea)
. The DPRK carried out its fourth nuclear test in January this year, following earlier tests in 2013, 2009 and 2006

the application of an elastic band at the base of thealways or viagra online.

. Early speculative estimates put the yield close to that of the Hiroshima bomb (10-15 kilotons) which makes it the most powerful DPRK test to date

. This comes hard on the heels of the launch of three medium-range ballistic missiles by North Korea on 5 September 2016
. North Korea’s nuclear weapon capability is advancing with each successive nuclear test. Nuclear and ballistic missile tests by North Korea are prohibited under several UN Security Council resolutions and very likely another such resolution will be adopted by consensus in response to today’s nuclear test.

The Nuclear Weapons Institute of the DPRK announced that the successful nuclear test confirmed the “specific features of the nuclear warhead that has been standardized to be able to be mounted on strategic ballistic rockets of the Hwasong artillery units of the Strategic Forces” . It added that “there was no radioactive materials leakage” from the detonation, and that the “standardization of the nuclear warhead will enable the DPRK to produce at will and as many [warheads] as it wants [of] a variety of smaller, lighter and diversified nuclear warheads of higher strike power with a firm hold on the technology for producing and using various fissile materials”.

Tariq Rauf is Director of the Disarmament, Arms Control and Non-Proliferation Programme at the Stockholm International Peace Research Institute. As Head of Nuclear Verification and Security Policy Coordination at the International Atomic Energy Agency he was involved with nuclear verification in North and South Korea, among other States.