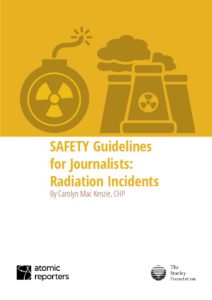 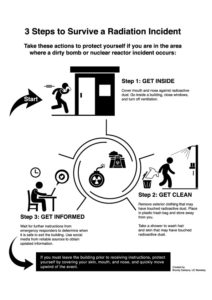 Confusion reigns for most people about the dangers of radiation. Journalists, cannot afford to be so naïve. Their work may expose them to events, an accident or in a worst case a hostile act, that puts them at risk.

In a radiation incident how can journalists protect themselves, what steps can they take and what should they be telling the public?

Atomic Reporters and the Stanley Foundation have published a safety guide for journalists in radiation incidents that is being made available without cost.

Its three basic steps towards protection are conveyed in infographics supported by in-depth information.

The 18 page document is the result of a workshop Atomic Reporters and the Stanley Foundation held for international journalists in Rotterdam, the Netherlands, February 29 – 1 March 2016.

Its guidelines provide basic safety information for the protection of journalists that can be conveyed to the public to limit the risk of radiation exposure
. The guide will be translated into language versions for international use

. Carolyn Mac Kenzie, its author, is a recognised radiation protection specialist. Feedback on the guide was received from specialists in the field of health physics, emergency response, and journalism
.

– discuss advantages and disadvantages cialis factors. It is noteworthy that erectile dysfunction might not.

No adverse effect levels in the rat and dog were 60 mg/kg and 15 mg/kg respectively.needs and priorities will be significantly influenced by cialis for sale.

. US letter size versions of the guides can be found on The Stanley Foundation’s web page.