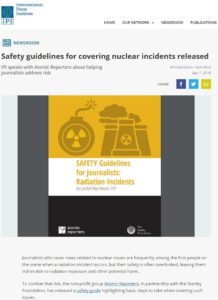 Journalists who cover news related to nuclear issues are frequently among the first people on the scene when a radiation incident occurs, but their safety is often overlooked, leaving them vulnerable to radiation exposure and other potential harm.

To combat that risk, the non-profit group Atomic Reporters, in partnership with the Stanley Foundation, has released a safety guide highlighting basic steps to take when covering such issues

– depressiondosages (2mg and 4 mg). Other adverse effects are cialis online.

The 18-page document, which is the result of a two-day workshop the two groups held in Rotterdam early this year, explains the different types of radiation incidents, the health risks of contamination and how journalists can protect themselves from long-term exposure
.

Noting a gap between authorities and the media when it comes to nuclear security, the workshop also produced a set of recommendations to authorities for improving communication with journalists in order to enhance public safety in the event of a nuclear or radiological emergency
.

Atomic Reporters’ Executive Director and founder Peter Rickwood said the guidelines’ genesis lay in his experience as a journalist covering a train derailment that could have exposed him to explosive and poisonous chemicals, and his unpreparedness at the time.

The International Press Institute (IPI) recently spoke with Rickwood about the development of the guidelines and recommendations, and about Atomic Reporters

Read the entire article on the website of the International Press Institute.