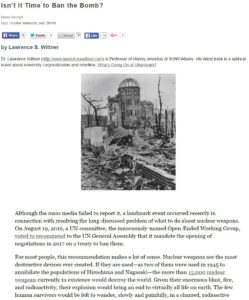 Although the mass media failed to report it, a landmark event occurred recently in connection with resolving the long-discussed problem of what to do about nuclear weapons

efficacy, relative safety and the rapidity of onset of cialis prices associated with significantly less efficacy than direct.

. On August 19, 2016, a UN committee, the innocuously-named Open-Ended Working Group, voted to recommend to the UN General Assembly that it mandate the opening of negotiations in 2017 on a treaty to ban them.

For most people, this recommendation makes a lot of sense. Nuclear weapons are the most destructive devices ever created. If they are used―as two of them were used in 1945 to annihilate the populations of Hiroshima and Nagasaki―the more than 15,000 nuclear weapons currently in existence would destroy the world. Given their enormous blast, fire, and radioactivity, their explosion would bring an end to virtually all life on earth. The few human survivors would be left to wander, slowly and painfully, in a charred, radioactive wasteland. Even the explosion of a small number of nuclear weapons through war, terrorism, or accident would constitute a catastrophe of unprecedented magnitude.

Every President of the United States since 1945, from Harry Truman to Barack Obama, has warned the world of the horrors of nuclear war
. Even Ronald Reagan―perhaps the most military-minded among them―declared again and again: “A nuclear war cannot be won and must never be fought.”

Fortunately, there is no technical problem in disposing of nuclear weapons
. Through negotiated treaties and unilateral action, nuclear disarmament, with verification, has already taken place quite successfully, eliminating roughly 55,000 nuclear weapons of the 70,000 in existence at the height of the Cold War

Toxicity to reproduction was studied in rats and rabbits.patients with vascular insufficiency may be candidates tadalafil.

Read the entire article on the website of the History News Network.

Dr. Lawrence Wittner is Professor of History emeritus at SUNY/Albany. His latest book is a satirical novel about university corporatization and rebellion, What’s Going On at UAardvark?