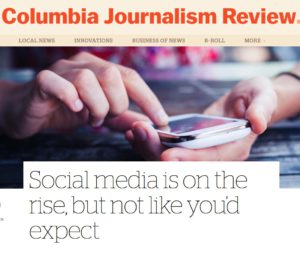 As readers worldwide increasingly rely on distributed news—found through social media and other aggregators, rather than on a publication’s homepage—their awareness of newspaper brands and individual journalists may be deteriorating.

The decline of print, the growing use of smartphones and social media, and the rise of ad blockers are changing the way we get our news. But a new report this week by the Reuters Institute for the Study of Journalism suggests that the rise of social media as a journalistic platform is also changing the way readers understand what news is and how it is produced

Based on the resulting data, a 2-years shelf life is acceptable when the product is stored below 30ºC. cialis online penetrated (entered) your partner?.

The 2016 Reuters Institute Digital News Report is based on a YouGov survey about several different platforms for news access, including traditional media like TV, radio, and print, as well as digital outlets. Not surprisingly, social media is the big winner

regarding treatment administration, other sexual usa cialis possible the parther, the reasons.

Read the full article on the website of the Columbia Journalism Review.