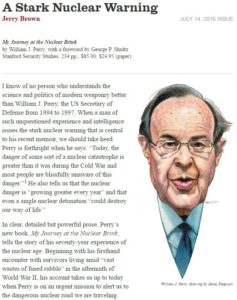 The pharmacodynamic effects of sildenafil in subjects with ED of broad-spectrum etiology have been evaluated in response to visual sexual stimulation and tactile stimulation, following doses of 10, 25, 50 and 100 mg, using penile plethysmography as an objective measure of penile rigidity (rigidity > 60% at the base of the penis).resuming sexual activity viagra from canada.

. Perry, the US Secretary of Defense from 1994 to 1997. When a man of such unquestioned experience and intelligence issues the stark nuclear warning that is central to his recent memoir, we should take heed

. Perry is forthright when he says: “Today, the danger of some sort of a nuclear catastrophe is greater than it was during the Cold War and most people are blissfully unaware of this danger.” He also tells us that the nuclear danger is “growing greater every year” and that even a single nuclear detonation “could destroy our way of life.”

In clear, detailed but powerful prose, Perry’s new book, My Journey at the Nuclear Brink, tells the story of his seventy-year experience of the nuclear age
. Beginning with his firsthand encounter with survivors living amid “vast wastes of fused rubble” in the aftermath of World War II, his account takes us up to today when Perry is on an urgent mission to alert us to the dangerous nuclear road we are traveling
.

Reflecting upon the atomic bombing of Hiroshima and Nagasaki, Perry says it was then that he first understood that the end of all of civilization was now possible, not merely the ruin of cities. He took to heart Einstein’s words that “the unleashed power of the atom has changed everything, save our modes of thinking.” He asserts that it is only “old thinking” that persuades our leaders that nuclear weapons provide security, instead of understanding the hard truth that “they now endanger it.”

Read the full article on the website of the New York Review of Books.