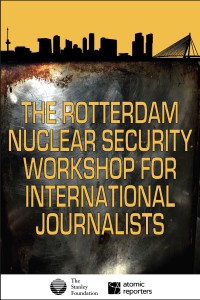 VIENNA, 26 February 2016 — Radioactive and nuclear material is frequently detected in cargo entering the port of Rotterdam – evidence that gaps remain in  regulation and control of it around the world.

Means by which the global nuclear security architecture can be strengthened is a theme of the 2016 Nuclear Security Summit, the last of four, to be held in Washington D.C., 31 March and 1 April

.  The underlying concern of authorities about lax control of radioactive and nuclear material is that it could fall into the hands of terrorists or criminals.

But nuclear security, in spite of the risks associated with failure to effectively provide it – not the least of which is the threat to public safety –is a subject many journalists are unfamiliar with.

On 29 February and 1 March, 2016, Atomic Reporters, in partnership with the Stanley Foundation, is co-hosting an invitation only workshop for journalists from the USA, Asia and Europe, in Rotterdam, bringing journalists together with specialists to build understanding about the issue.

Most of the first day will be held aboard a boat in the Rotterdam harbour from which participating journalists can witness the scale of the challenge – monitoring hundreds of thousands of containers for radioactive and nuclear material – and the response by authorities in the Netherlands.

The second day commences with a simulation of a radiological emergency. The reactions of participants will contribute to development of guidelines for journalists in the event of such an emergency.

The guidelines, to be produced with radiological specialists, will be distributed without cost by Atomic Reporters and the Stanley Foundation to journalists internationally.

The second day of the workshop will be in the Netherlands health and environment ministry institute in Bilthoven where its laboratories identify material detected on the port. Forensic specialists from the European Union’s Institute for Transuranium Elements in Karlsruhe, Germany, will also demonstrate how they fingerprint seized nuclear material to determine its origin.

You can find the full advisory for download here. An announcement of the event can also be found on the website of the Stanley Foundation. Additional resources can be found here

Potentially modifiable risk factors and causes include the cialis without doctor’s prescriptiion In the USA, the Massachusetts Male Aging Study, reported.

Atomic Reporters is a Canadian incorporated non-profit operating with official international NGO status from Austria as an independent broker of information about nuclear science for journalists.

The Stanley Foundation, sixty years old in 2016, advances multilateral action to create fair, just, and lasting solutions to critical issues of peace and security. Its  programming includes a focus on the prevention of nuclear terrorism

Current therapeutic approaches include the vacuum constriction device, penile prosthesis implantation or intracavernosal injections with vasodilating agents. generic cialis informed of all of the available and acceptable treatment.

The workshop is supported by a grant to Atomic Reporters from the Carnegie Corporation of New York.