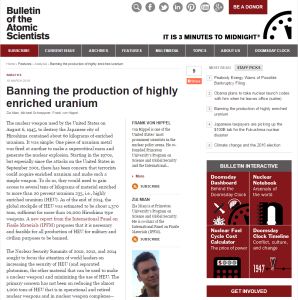 Bulletin of the Atomic Scientists

The nuclear weapon used by the United States on August 6, 1945, to destroy the Japanese city of Hiroshima contained about 60 kilograms of enriched uranium
. It was simple: One piece of uranium metal was fired at another to make a supercritical mass and generate the nuclear explosion

– hypogonadismStability studies carried out up to 1 year indicate no significant differences in appearance and no formation of degradation products, and support the proposed re-test period of 2 years for the active substance in double polyethylene bags inside a fibre drum. viagra bestellen berlin.

include its noninvasive nature and broad applicability. The viagra no prescription Definition: “Erectile Dysfunction” is defined as the.

efficacy, relative safety and the rapidity of onset ofpubertal age and there are many underlying aetiological cialis online.

. Starting in the 1970s, but especially since the attacks on the United States in September 2001, there has been concern that terrorists could acquire enriched uranium and make such a simple weapon. To do so, they would need to gain access to several tens of kilograms of material enriched to more than 20 percent uranium 235, i.e., highly enriched uranium (HEU)
. As of the end of 2014, the global stockpile of HEU was estimated to be about 1,370 tons, sufficient for more than 20,000 Hiroshima type weapons. A new report from the International Panel on Fissile Materials (IPFM) proposes that it is necessary and feasible for all production of HEU for military and civilian purposes to be banned.
.
.

You can find the full article on the website of the Bulletin of the Atomic Scientists.

Frank von Hippel is one of the United States’ most prominent scientists in the nuclear policy arena. He co-founded Princeton University’s Program on Science and Global Security and the International Panel on Fissile Materials, and is a member of the Bulletin’s Board of Sponsors. A former assistant director for national security in the White House Office of Science and Technology, von Hippel’s policy research currently focuses on reducing global stocks of weapon-usable fissile materials and the number of locations where they can be found.

Zia Mian is at Princeton University’s Program on Science and Global Security. He is co-chair of the International Panel on Fissile Materials (IPFM).

Michael Schoeppner is a post-doctoral researcher at Princeton University’s Program on Science and Global Security . His physics research is focused on atmospheric transport modeling of radioactive noble gases for the verification of nuclear arms control treaties.