Growing up during the Cold War, young Atomic Reporters were familiar with the word “Kremlinology.” That art of signal reading has steadily declined over time, as demonstrated by Google’s Ngram Viewer, which compiles the number of times authors use words in published literature.

The decline of Kremlinology has contributed to many people wondering whether the Crimean dispute is going to affect negotiations with Iran. While the U.S. insists that the two issues be kept separate and that the Ukraine spat shouldn’t jeopardize the Iran-nuclear negotiation, it’s far from clear whether Moscow sees the issue quite the same.

Enter Vladimir Putin in his RT interview last June. It didn’t receive much coverage among Western news outlets. Those that wrote about the interview did so derisively
. That’s too bad, because if a person can get past the high-octane spin, there was some important signaling going on about how Russia interprets U.S. interest in keeping Iran on the hot seat

Here’s a transcript of the parts that may be relevant for journalists and policymakers trying to figure out what may transpire following the March 16 Crimea vote, when Iran meets world powers in Vienna for their next round of talks: 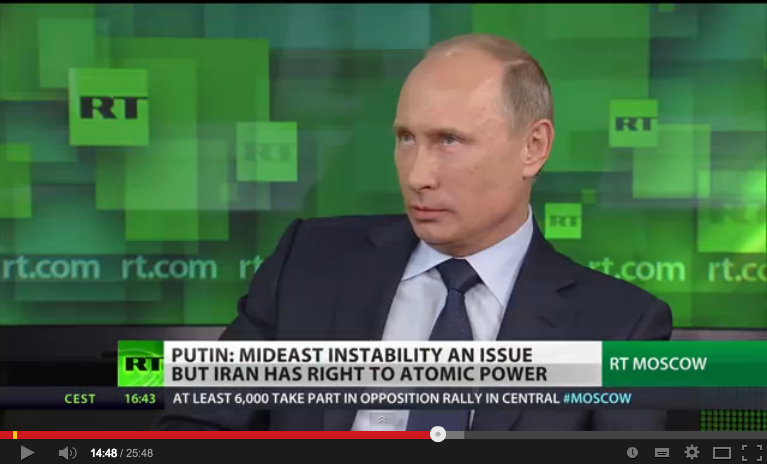 “Iran has the right to a peaceful nuclear program and it can’t be singled out for discrimination. Second, we need to be aware that Iran is located in a very challenging region. I’ve told our Iranian partners about that. That’s why Iranian threats made toward neighboring countries, particularly Israel — threats that Israel can be destroyed — are absolutely unacceptable. This is counterproductive. It’s best to avoid wording that could be improperly quoted or could be interpreted differently, that’s why the focus on Iran does have a reason behind it.

“I have no doubt that Iran is compliant with the rules, simply because there’s no proof of the opposite. According to the latest IAEA report, Iran has been abiding by the commitments it has taken up. True, there are some outstanding issues but with due patience and friendly attitudes they can be resolved. I have a great respect for Iran and a great interest in it. This is a great country indeed. You don’t often here this attitude mentioned in relation to Iran but it’s true. This is a country with a great culture, a great history and is a great nation. They’re very proud of their country. They have a great understanding of their place both in the region and in the world. That’s something you have to respect.

“Iranians are very smart and cunning politicians and to a certain degree they have exploited this confrontation with the U.S. They’re extremely crafty in this and they do it to tackle their domestic political issues. When there’s an external enemy it united the nation, but I guess the U.S
. has been employing the same technique.

“After the collapse of the Soviet Union there have been no external threats that would allow Washington to dominate the West. There must be a threat so that the U.S. can protect its allies from it. This position yields political and economic benefits. If everyone relies on one country for protection, then this country is entitled to some preferential treatment. So its very important to possess this status as a global defender, to be able to resolve global issues, even beyond the realm of foreign policy and security issues. I think the U.S. has been using Iran for this very purpose, that it is to unite their allies in the shadow of a real or false threat.

“It’s quite a complicated issue but it’s not an issue for Russia. We’ve been complying with our international commitments, including on Iran’s peaceful nuclear program
. As you know, Russia built the Bushehr nuclear power. plant in Iran. We’ve completed this project and are prepared for further cooperation. Yet, when we proposed to enrich uranium on Russian territory, our Iranian partners refused for reasons unknown to us. They argue they will enrich uranium on their own, in line with existing international regulation. As I said earlier, as long as they don’t break any rules, they’re fully entitled to do that. We will endorse this right but we will also remain aware of the concern that other states and the international community has with full compliance of these rules.

“To date, we don’t have any significant ideological differences but we have fundamental cultural differences. Individualism lies at the core of the American identity while Russia has been a country of collectivism. One student of Pushkin’s legacy has formulated this difference very aptly. Take Scarlet O’Hara from Gone With the Wind, for instance. She says “I’ll never be hungry again. This is the most important thing for her
. Russians have different, far loftier ambitions, more of a spiritual kind. It’s more about your relationship with God. We have different visions of life. That’s why it’s very difficult to understand each other, but it’s still possible.

“The U.S. is a very democratic state, there’s no doubt about that. It originally developed as a democratic state. When the first settlers set their foot on the continent, life forged them to establish a relationship and maintain a dialog with each other to survive. That’s why America was initially conceived as a fundamental democracy.

“With that in mind, we should not forget that America’s development began with a large-scale ethnic cleansing, unprecedented in human history. When Europeans arrived in America, that was the first thing they did and you have to be honest about it. There are not so many stories like it in human history.

“Take the destruction of Carthage by the Roman Empire. The legend has it that the Romans plowed over and sowed the city with salt so that nothing would ever grow there. Europeans didn’t use the salt because they used the land for agriculture, but they wiped out the indigenous population.

“Then there was slavery and that is something that is deeply ingrained in America. In his memoirs, Secretary of State Colin Powell revealed how hard it was for him as a black man, how hard it was for him to live with other people staring at you. It means this mentality has taken root in the hearts and minds of the people and is likely to still be there.

“Now take the Soviet Union. We know a lot about Stalin now. We know him as a dictator and a tyrant. But still, I don’t think in the Spring of 1945 Stalin would have used a nuclear bomb against Germany had he had one. He could have done it in 1941 or 1942 when it was a matter of life or death but I really doubt he would have done it in 1945 when the enemy had almost given up and had no chance to reverse the trend. Now look at the U.S. They dropped the bomb on Japan, a country that was a non-nuclear state and one that was very close to defeat.

“So, there are big differences between us but it’s quite natural that people with such differences are determined to find ways to understand each other better. I don’t think there is an alternative. Moreover, it’s not by chance that Russia and the U.S. forged an alliance in the most critical moments of modern history. That was the case in World War I and World War II. Even if there was fierce confrontation, our countries united in the face of a common threat, which means there’s something that unites us. There must be some fundamental interest that brings us together. That’s something that we need to focus on first. We need to be aware of our differences but focus on a positive agenda that can improve our cooperation.”