The following notes were provided at a reception for the launch of Atomic Reporters 18 March 2014 at the Canadian Residence in Vienna, Austria

But because opportunities to learn more about the subject are scarce, only a few journalists possess the knowledge to approach it confidently

regular intervals (the recommendation is six-monthly) for cialis online guideline was designed to address these issues and to.

. Newcomers assigned to cover the story find it particularly difficult. Complicating this problem, some experts are reluctant to talk to reporters who don’t understand the subject
.

Atomic Reporters has been established to act as a mentor and an unbiased, independent source of information for journalists who wish to expand their knowledge of the subject and increase their competence.

It will open two-way paths of communication between journalists and experts, many of whom, particularly in the nuclear non-proliferation, safety and security communities, are frustrated because their concerns aren’t being reflected in the media. Data collected by Atomic Reporters shows that while nuclear experts are willing to engage with the press, speaking daily on average to a reporter, only 28 percent of the journalists who address them are considered “well informed” about the subject.

In June 2014, we will hold a series of workshops for journalists from 17 Middle East countries. Initial workshops were held in Amman, Jordan in November 2013, and in Cairo in January 2012. We have also started to organize a workshop for journalists in Japan.

The foundation of Atomic Reporters has received guidance from nuclear technology and policy experts, communications practitioners and journalists
. It has been incorporated in Canada as a non-profit and has been granted international non-governmental status in Austria, where it operates
.

We wish to convey our sincere thanks to the United Arab Emirates, Austria, and Ireland, whose generosity in supporting our Middle East outreach also affirms our relevance as we take our first steps.

We shall continue to seek funding to expand our activities, particularly for the acquisition of open-source data tools to provide news media professionals and policy makers with insights by detecting trends and directions in the nuclear debate and to develop a nuclear glossary of terms for the Middle East.

The bedrock of Atomic Reporters is its independence. In its goal to become an indispensable tool in the reporting of nuclear news, it will promote evidence-based reporting, resist partisanship and advocate the rights of reporters to accountability and clarity.

Atomic Reporters surveyed experts and journalists who cover the nuclear file to obtain a measure of how they work together. Although the sampling is small,  the poll provides a clear snapshot of the relationship. You can see the results here: Atomic Reporters Polling Result. 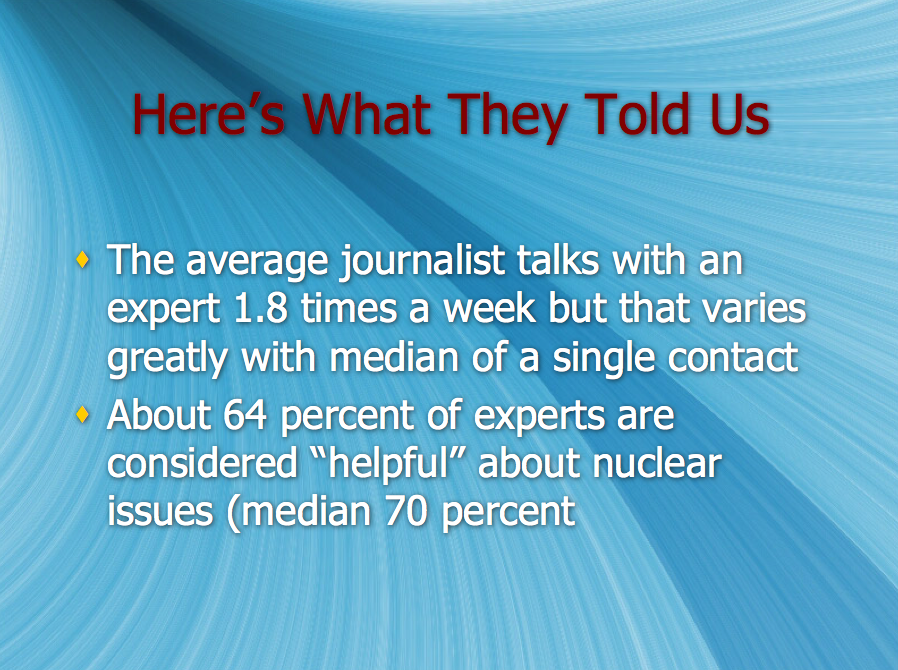