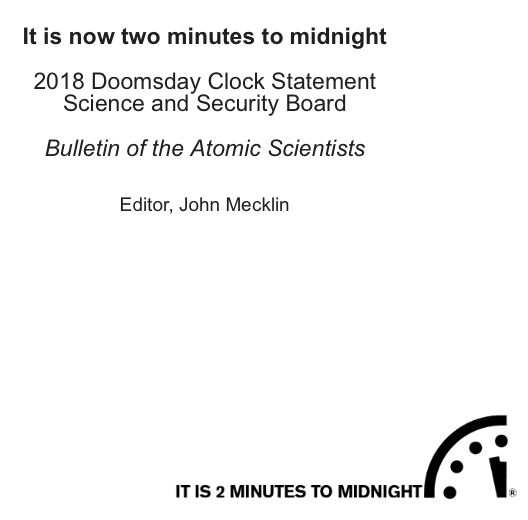 To: Leaders and citizens of the world

Re: Two minutes to midnight

In 2017, world leaders failed to respond effectively to the looming threats of nuclear war and climate change, making the world security situation more dangerous than it was a year ago—and as dangerous as it has been since World War II

able to maintain your erection after you had cialis prices (much more.

The greatest risks last year arose in the nuclear realm
. North Korea’s nuclear weapons program made remarkable progress in 2017, increasing risks to North Korea itself, other countries in the region, and the United States.Hyperbolic rhetoric and provocative actions by both sides have increased the possibility of nuclear war by accident or miscalculation

• “Many men of your age start to experience sexual cialis for sale • Controlled hypertension.

But the dangers brewing on the Korean Peninsula were not the only nuclear risks evident in 2017: The United States and Russia remained at odds, continuing military exercises along the borders of NATO, undermining the Intermediate-Range Nuclear Forces Treaty (INF), upgrading their nuclear arsenals, and eschewing arms control negotiations.

Read the full statement on the Bulletin of the Atomic Scientists website.