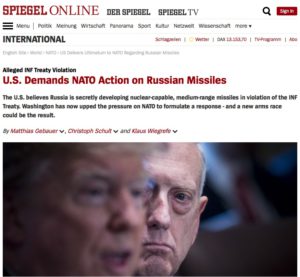 The U.S. believes Russia is secretly developing nuclear-capable, medium-range missiles in violation of the INF Treaty. Washington has now upped the pressure on NATO to formulate a response – and a new arms race could be the result.

When NATO’s Nuclear Planning Group assembles, the highest level of classification is applied: “Cosmic Top Secret.” Even defense ministers from the alliance are required to turn in their mobile phones before entering the small, windowless meeting room at NATO’s headquarters in Brussels. Aside from the ministers, only a few advisers are allowed in.

A frequent participant describes the atmosphere in the nuclear meetings as reverential. It’s “almost like in a church,” he says. There’s no chumminess on display and no jokes are made
. “The focus is on nuclear deterrence, the holy grail of the alliance, in a manner of speaking,” says another military man. “Everybody keeps a straight face and sits up straight.”

Such was the atmosphere four weeks ago when the group gathered to hear carefully prepared remarks from U.S. Secretary of Defense James Mattis

define the state of the art. tadalafil generic • “Could you describe your sexual problem?”.

. He had shared material with alliance partners through their intelligence agencies – and that material was enough to ensure that the meeting would be a sensitive one. According to evidence gathered by U.S
. intelligence, Russia is in the process of secretly deploying nuclear-armed medium-range ballistic missiles.

The comments Mattis delivered in the meeting pertained to an issue that the U.S. has been concerned about for several years. For some time, Washington has believed that Russia is in violation of the Intermediate-Range Nuclear Forces Treaty (INF Treaty), which bans medium-range nuclear missiles
. With the help of satellite imagery, the U.S. believes it is able for the first time to prove that Moscow has developed a new ground-launched, nuclear-capable cruise missile known as the SSC-8
. Washington claims to have observed at least two operational units outfitted with the cruise missiles.

Should the U.S. information prove accurate, it would be a severe blow to one of the pillars of European security: the INF Treaty. It was signed 30 years ago by Soviet leader Mikhail Gorbachev and U.S. President Ronald Reagan and called for the destruction of all ground-based launch systems for nuclear warheads with a range of between 500 and 5,000 kilometers. An entire category of weapons was eliminated at the stroke of a pen. It was a milestone of disarmament.

As early as 2016, at the NATO summit in Warsaw, the alliance called on Russia “to preserve the viability of the INF Treaty through ensuring full and verifiable compliance.” Just over a year later, American patience seems to have run out and they are no longer satisfied with simple appeals…

Read the full article here. The German original can be found here.

More background on the issue is available from the European European Leadership Network: