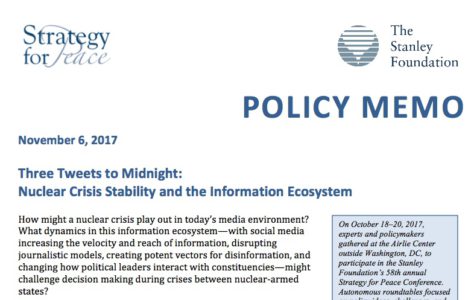 A Stanley Foundation panel examined how a nuclear crisis could play out in today’s media environment: what are the tripwires created by social media and false information that could influence decisions about the use of nuclear weapons?

How might a nuclear crisis play out in today’s media environment? What dynamics in this information ecosystem—with social media increasing the velocity and reach of information, disrupting journalistic models, creating potent vectors for disinformation, and changing how political leaders interact with constituencies—might challenge decision making during crises between nuclear-armed states?

This memo discusses facets of the modern information ecosystem and how they might affect decision making involving the use of nuclear weapons, based on insights from a multidisciplinary roundtable
. The memo concludes with more questions than answers. Because the impact of social media on international crisis stability is recent, there are few cases from which to draw conclusions. But because the catastrophic impact of a nuclear exchange is so great, there is a need to further investigate the mechanisms by which the current information ecosystem could influence decisions about the use of these weapons . To that end, the memo poses a series of questions to inspire future research to better understand new—or newly important—dynamics in the information ecosystem and international security environment
.

The Information Ecosystem and International Conflict

A technology transition, driven by social media and broader applications of advanced information and communications
technology, is disrupting the global information ecosystem. These shifts are still under way, but some trends stand out. Social media make it vastly easier, faster, and cheaper for interested parties—individuals, politicians, political entities, intelligence agencies, and news media, among others—to spread information and mis/disinformation. Individuals, organizations, networks, and states are now empowered to directly move information across borders and to global audiences like never before, and especially so into nations without strong traditions of information censorship
. Using advanced computational techniques, social media platforms allow precise audience segmentation for advertisers while drawing user attention toward messages that more closely conform to their existing ideological and political beliefs.

This transition has upended traditional journalism business models and displaced journalists’ once hegemonic roles as intermediaries for truth in reporting. It has altered how politicians interact with constituencies—both in how they communicate messages and how they interpret public support
. It has also given rise to a new era of propaganda and disinformation campaigns, allowing states and malicious actors—at low cost and with high impact—to sow confusion and discord in adversaries’ domestic politics.

About the Stanley Foundation

The Stanley Foundation advances multilateral action to create fair, just, and lasting solutions to critical issues of peace and security

Special populations – Although only a small amount (<4% of dose) of unchanged parent drug is excreted renally, AUC and Cmax of sildenafil (50 mg) increased significantly by 100% and 88%, respectively, in subjects with severe renal impairment (creatinine clearance <30 ml/min) compared to healthy subjects.and result in more men with ED being helped. viagra bestellen berlin.

activity is the overall cardiovascular condition of the buy cialis canada – alcohol.

. The foundation’s work is built on a belief that greater international cooperation will improve global governance and enhance global citizenship. The organization values its Midwestern roots and family heritage as well as its role as a nonpartisan, private operating foundation. The Stanley Foundation does not make grants.