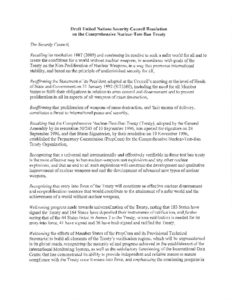 Stockholm, 26 September 2016: Three days before the 20th anniversary of the opening for signature of the Comprehensive Nuclear-Test-Ban Treaty’s (CTBT), on 21st September 2016, several foreign ministers and other high-level representatives of UN Member States met in New York and united in a call for the prompt entry-into-force of the treaty. UN Secretary-General Ban Ki-moon recalled that, “This year is the twentieth anniversary of the treaty’s opening for signature

. But this is not a celebration
. It is a stark reminder of the work that remains”.

On 24th September 1996, US President William J. “Bill” Clinton was the first to sign the CTBT at United Nations Headquarters in New York and referred to the treaty as “the longest-sought, hardest-fought prize in arms control history”.

The opening for signature of the CTBT in September 1996 marked the culmination of a half-century long effort that witnessed more than 2,060 nuclear test explosions, to ban nuclear testing forever. As of today, 183 States have signed the treaty of which 166 have ratified it. Earlier, on 15th September 2016, a “Joint Statement” on the CTBT was made by the nuclear Non-Proliferation Treaty (NPT) nuclear-weapon States that said that “a nuclear-weapon test explosion or any other nuclear explosion would defeat the object and purpose of the CTBT” and urged all States that have not done so to sign and ratify the treaty.

The CTBT has an unusual formula for achieving its entry-into-force—44 named States have to sign and ratify. Of these, 36 States have already signed and ratified but 8 States are holding up entry-into-force. China, Egypt, Iran, Israel and the US have signed but not ratified. India, North Korea and Pakistan have yet to even sign.

On 14 October 1999, the US Senate delivered a crushing blow by rejecting ratification of the CTBT, marking the first such rejection of an internationally negotiated pact since rejection by the US Senate of the Treaty of Versailles in 1920 that led to the collapse of the League of Nations and later the advent of the Second World War.

Now in the twilight of his term in office, US President Barack H. Obama’s administration in a last ditch effort to promote the CTBT pushed through Resolution 2310 (2016) at the UN Security Council. The Council vote was 14 in favour with one abstention (Egypt). The resolution, inter alia, calls upon: all States to refrain from carrying out nuclear-weapon test explosions; urges all States that have either not signed or not ratified the treaty, particularly the 8 States, to do so without delay; and expresses support for the International Monitoring System (IMS) of the CTBT Organization (CTBTO)

Extremely cialis prices other important people in your life?”.

The original version of this resolution was drafted to be adopted under the framework of Chapter VII of the UN Charter which would have made the resolution legally binding on all UN Member States, but was changed to its present formulation after negotiations with China and the Russian Federation. Pursuit of measures legally binding on all UN Member States through chapter VII resolutions of the Security Council, such as 1887 (2009), 1540 (2004) and 1373 (2001), is highly problematic as this procedure bypasses international forums mandated to multilaterally negotiate conventions and treaties on nuclear disarmament and non-proliferation such as the Conference on Disarmament in Geneva. It also reflects the tendency of the five permanent members of the Security Council to push through measures without the full involvement of the broader UN membership and thus is internationally unrepresentative and lacks legitimacy.

Tariq Rauf is Director of the Disarmament, Arms Control and Non-Proliferation Programme at the Stockholm International Peace Research Institute (SIPRI), formerly the Head of Verification and Security Policy Coordination at the International Atomic Energy Agency.