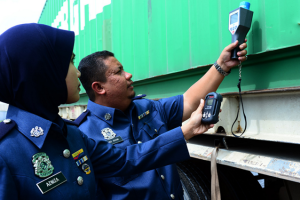 A nuclear security agreement that will take effect on 8 May will reduce the risk of a terrorist attack on a nuclear power plant and make it harder to smuggle nuclear material
.

The entry into force of the Amendment to the Convention on the Physical Protection of Nuclear Material (CPPNM) was secured today with the deposit of the instrument of ratification by Nicaragua, which brought the number of adherences to 102 States Parties to the CPPNM, the threshold required for the agreement to come into effect in 30 days
. The Amendment, adopted more than a decade ago, will make it legally binding on countries to protect nuclear facilities. It will also extend the CPPNM’s application to nuclear material in domestic use, storage and transport

combination (11). In addition, patients with possible or cialis prices the NO stimulus is removed or ceased, cGMP is no longer.

“This is an important day for efforts to strengthen nuclear security around the world,” said IAEA Director General Yukiya Amano in a statement. The Amendment “will help reduce the risk of a terrorist attack involving nuclear material, which could have catastrophic consequences.”

Read the full text of the release on the IAEA website.