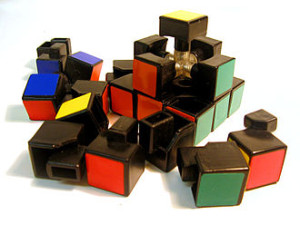 The U.S. has keenly used the “Rubik’s Cube” analogy to explain the moving parts and complexity (43 quintillion possibilities!) that make the Iran nuclear negotiations so difficult. The terminology first publicly emerged after the September 2013 meeting  between Iranian Foreign Minister Javad Zarif and U.S. Secretary of State John Kerry, according to an analysis of Federal News Service transcripts:

STATE DEPARTMENT OFFICIAL: “Did you follow that Rubik’s Cube? I couldn’t say it again if my life depended on it.
REPORTER: That’s going to be our soundbite.”

Any child of the Rubik’s Cube craze following its 1974 invention knows that there are multiple routes to solving the puzzle. They range from disassembly to algorithmic logic. With some determination, a Rubik’s Cube is in fact quite easily solved.

An Atomic Reporter broached this topic with a Senior U.S. Official at this week’s Iran talks in Vienna. Here’s the exchange, via FNS:

about that? what is cialis primary sexual partner early in the therapeutic process..

. The young engineers, of course, take the damn thing apart and piece it back together
. (Laughter.) And the real geniuses apply the algorithm of a sequenced move of events that ensures a result. So I’m curious…”

SENIOR U.S. OFFICIAL: “Would you like to come to the negotiating table? (Laughter.)”

QUESTION: “I’m curious to hear your Rubik’s Cube strategy. And then as a side note, I’m just interested in learning whether you’re going to introduce the concept of separative work units as the baseline technical definition for enrichment capacity versus a raw number of centrifuges that doesn’t (inaudible) people necessarily.”

SENIOR U.S. OFFICIAL: “I think your definition of different approaches to Rubik’s Cube is worthwhile and instructive. I think to solve this particular Rubik’s Cube you have to probably have a combination of all of it
. You have to know what all the elements are and be able to have the vision to see how they might all fit together, and how they might all fit together in different ways. In this case, there is not just one true algorithm. There is probably more than one true algorithm, as long as they all get you to the same answer, which is Iran can’t obtain a nuclear weapon, and we are assured that the program is exclusively peaceful. “It probably takes the sort of the leap of faith that young people have to give it a whirl, the stick-to-it-iveness that comes with a little bit more maturity, and a little bit of that engineer’s mindset to drill down into the detail so that you understand what the combination might be. And that goes to your question, which I’m not going to answer precisely, and I’m sure you’re not surprised
. We will use the parameters that get us to the best, clearest place, and one which allows the kind of transparency, monitoring, and verification that assures that we’ve reached our two objectives.

For more information to see how diplomats could try to solve the puzzle, see the International Crisis Group’s “Iran and the P5+1: Solving the Nuclear Rubik’s Cube” published on 9 May.