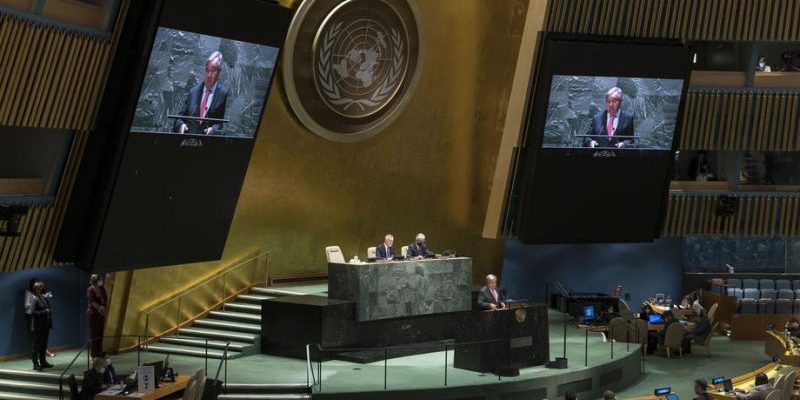 Nuclear weapons are killing people in Ukraine even when they are not used as Russia is utilizing nuclear deterrence as a shield to protect its atrocities, write Valeriia Hesse and Liza Khodorovska.

Valeriia Hesse is a management and research consultant at Atomic Reporters and a fellow at the Odesa Center for Nonproliferation (OdCNP) in Ukraine. Yelyzaveta Khodorovska, member of Atomic Reporters, is the first Ukrainian youth representative to address the United Nations since the Russian invasion.

Russia’s war against Ukraine and the realities of nuclear threats have scattered many of us across the world.

Most Ukrainians did not believe that this war was possible. They never imagined that they would be suffering from brutal aggression reminiscent of the colonial era, coupled with inhumane crimes and torture that break every law of war. All of this was made possible by the terrorizing threats to use nuclear weapons.

But here we are. Do Ukrainians now believe that the Russian government’s nuclear threats are real? Unfortunately, we do.

Over the past five months of this cruel war, we realize that there is no limit to how far toward the unimaginable they can go. A UN NPT nuclear-weapon state threatens to use its nuclear arsenal not only against a sovereign NPT non-nuclear weapon state but against anyone who dares to intervene in the conflict to help protect innocent lives.

Nuclear weapons are killing people in Ukraine even when they are not used because Russia is utilizing nuclear deterrence as a shield to protect its atrocities. This is unacceptable. It is the NPT parties’ job to condemn this and all nuclear threats, as well as make sure no one uses them again.

Fifty-two years since the Treaty’s entry into force, we see that the international security system has failed to do what it is supposed to do, totally paralysed by a nuclear-armed veto-holder.

Nuclear-weapon states have failed to fulfil their disarmament obligations, yet nuclear deterrence has worked.

Nuclear weapons have deterred the enforcement of human rights, deterred justice, deterred help, and deterred the hope our generation should feel. Nuclear states did not live up to their commitments. China and Russia are increasing their arsenals, and the United Kingdom has raised the cap on the maximum number of warheads by 40%. All the nuclear-armed countries are fuelling a new nuclear arms race by spending $82 billion on nuclear weapons in 2021 alone. This includes building new and more dangerous weapons.

Although, it is not just the nuclear-weapon states. Non-nuclear-weapon states that rely on extended nuclear deterrence, known as the “nuclear umbrella,” have not taken any steps toward reducing their reliance on nuclear weapons. Instead, more states come under the “umbrella,” moving in the opposite direction. In addition, Belarus reinforced the extended deterrence narrative by offering to host nuclear weapons on its territory.

What signal does this send to the world? That these countries think security is impossible without nuclear weapons? Is it not why we hear North Korea declare its readiness to ‘mobilize its nuclear potential? Must we actually see nuclear weapons used again before we finally make real efforts to end nuclear domination?

We cannot risk it: the next time could be the last time, ending the whole world too.

The NPT Review Conference was postponed due to the global pandemic and the year 2022, by an unlucky coincidence, highlighted that nuclear threats can be confronted, must be condemned, and must be stopped. Many countries have already done so through the Treaty on the Prohibition of Nuclear Weapons (TPNW). Like chemical and biological weapons conventions, TPNW establishes a comprehensive nuclear weapons prohibition in international law.

66 TPNW member states confronted and unequivocally condemned nuclear threats by adopting the Vienna Declaration and made a plan for disarmament by adopting the 50-point Vienna Action Plan. TPNW reinforces the NPT and advances the disarmament obligations outlined in the treaty. All NPT members can strengthen this synergy by signing and ratifying the TPNW.

Radiation knows no borders, and our globalized world knows no isolation from the socioeconomic catastrophe of even a limited nuclear conflict. The humanitarian impact of nuclear weapons is known too well: nuclear use brought tremendous suffering in Hiroshima and Nagasaki; the consequences of nuclear testing still haunt the people of Kazakhstan, the Marshall Islands, and elsewhere.

It seems, though, that the horrors that the use of nuclear weapons brings have been forgotten. Think about it: the world has erased the collective memories of 1938 and appeased the aggressor in 2014 again.

Humanity did not learn from the past and let a big war happen in Europe in 2022, now under nuclear threats.

Do we really want to repeat the use of nuclear weapons as well, this time risking being wiped out from our planet?

Can we just allow mass deaths shielded by nuclear deterrence to keep happening in Ukraine and who knows where else?

This article appeared originally at EURACTIV.