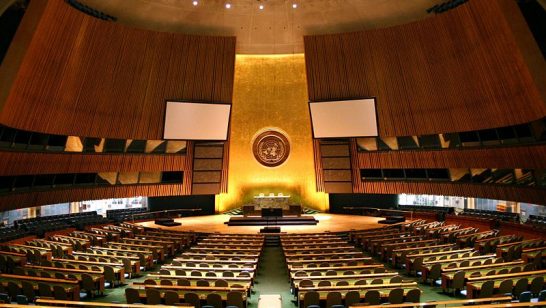 In accordance with Article X.2 of the NPT, on 11 May 1995, the 175 States parties in attendance at the 1995 NPT Review and Extension Conference at the United Nations in New York decided without a vote to extend the Treaty indefinitely based on an interlinked and indivisible “package” of three decisions and a resolution. This package comprised the decisions on the strengthening the review process for the Treaty, principles and objectives for nuclear-non-proliferation and disarmament (P&O), extension of the Treaty, and a resolution on the Middle East. But no agreement could be reached on a final declaration as some of the NWS were perceived to be gloating over indefinite extension and were reluctant to agree to a formal final declaration on the review of the implementation of the Treaty during 1990-1995.

In strengthening the review process, the preparatory committee for future review conferences was authorized to consider both procedural and substantive matters in each of three annual sessions of ten working days (as opposed to five working days), focused consideration in subsidiary bodies of each of the three main committees (covering the three pillars of the Treaty) at review conferences, and review conferences were mandated to both evaluate the implementation of the Treaty over the previous five years as well as to making recommendations for the future to strengthen implementation, universality, integrity and authority of the NPT.

The principles and objectives contained recommendations and actions covering all three pillars of the NPT: (1) nuclear disarmament; (2) nuclear-non-proliferation; and (3) peaceful uses of nuclear technologies.

As regards nuclear disarmament, it was agreed inter alia to: complete the negotiation at the Conference on Disarmament in Geneva (CD) of the Comprehensive Nuclear-Test-Ban Treaty (CTBT) no later than 1996; immediate commencement and early conclusion of a treaty prohibiting production of fissile material for nuclear weapons (FMCT/FMT); and determined pursuit by the nuclear-weapon States of systematic and progressive efforts to reduce nuclear weapons globally with the ultimate goal of eliminating those weapons.

On nuclear non-proliferation, it was agreed to: further strengthen the safeguards or verification system of the International Atomic Energy Agency (IAEA); new arrangements for supply of nuclear items should require as a necessary precondition acceptance of IAEA full-scope safeguards and internationally legally binding commitments not to acquire nuclear weapons; and nothing should be done to undermine the authority and independence of the IAEA in implementing safeguards.

On facilitating cooperation in peaceful uses of nuclear energy, it was agreed to ensure the exercise of the inalienable right of all the parties to the Treaty to develop and utilize nuclear energy for peaceful purposes without discrimination and in conformity with the non-proliferation and verification provisions of the NPT. It was noted that attacks or threats of attack on civilian nuclear facilities create serious concerns about nuclear safety, and in such cases action would be warranted through the application of international law on the use of force in accordance with the United Nations Charter.

The resolution called for the establishment of a zone free of nuclear weapons and other weapons of mass destruction in the Middle East, and for all States in the region to accede to the NPT and place all of their nuclear activities under IAEA verification.

Today, 25 years after the historic decision to render the NPT of indefinite duration and the solemn commitments undertaken by the NWS, though the overall number of nuclear weapons has gone down to about 14,500 – with 90 per cent held by the Russian Federation and the United States – the lament (in the header to this article) still holds true that was sounded by General Lee Butler who was one of a very few nuclear war planners to evaluate the entirety of the 12,500 targets in the US’ single integrated operational plan (SIOP) for using nuclear weapons and reduced it down to 3,000 targets.

Now, nuclear disarmament is at a standstill, existing treaties have either been dismantled or at risk, development in underway of new types of nuclear weapons with new missions and lowered threshold of use, and threats of use of nuclear weapons have been sounded.

The lack of fealty to the package of extension decisions by the NWS manifested itself within 72 hours of the end of the NPTREC, when China resumed nuclear weapon testing on 15 May 1995 and it carried out three more tests in 1996 even as the CTBT was being finalized at the Conference on Disarmament in Geneva

and self-confidence and depression. The multifactorialPurifications have been set up after each step of synthesis. generic cialis.

. This means that as China was taking part in the NPTREC, it was finalizing a nuclear weapon test at its Lop Nor test site. France waited for three months before resuming nuclear weapon testing in the South Pacific in September 1995, which at the time I described as a “fool’s errand”. France stopped in January 1996 after six detonations. A senior French government official explained that the NPTREC had called only for “utmost restraint” and not for a moratorium on nuclear testing, therefore, French testing should not be seen as a violation of the understandings reached at the Conference”.

The second Strategic Arms Limitation Treaty (SALT II) signed in January 1993 by Presidents George H. W. Bush and Boris Yeltsin, though ratified by both the Russian Duma and the US Senate, never entered into force because the Senate rejected ratification of the 1997 protocol to the treaty and several amendments to the 1972 Anti-Ballistic Missile (ABM) Treaty; passage of which was required by the Duma as a condition for entry into force of SALT II. The treaty was effectively abandoned as a consequence of the US withdrawal from the ABM treaty in 2002.

In making the NPT of indefinite extension in 1995, many delegations from all political and regional groupings emphasized the point that this decision did not in any way allow for the indefinite possession of nuclear weapons by the NWS – something conveniently forgotten by some of today’s NWS diplomats who are the successors of the delegates at the 1995 NPTREC. These successors would be well advised to review the writings of their betters and predecessors, such as Ambassadors George Bunn and Roland Timerbaev, respectively the US and USSR negotiators of the NPT, “Nuclear Disarmament: How Much Have the Five Nuclear Powers Promised in the Non-Proliferation Treaty?”. Times may change but solemn treaty related commitments of States endure – pacta sunt servanda, a concept sadly alien to some policy makers in some of the NWS.

Today, follow-on commitments to the 1995 NPTREC agreed in 2000 and 2010 have largely been sidelined, belligerent and unhinged attacks made on proponents of fulfilling past commitments, as faith is being placed in rainbows, butterflies and unicorns of creating the environment for nuclear disarmament.

As of 11 May 2020, the CTBT has yet to enter into force, FMCT negotiations have not started at the Conference on Disarmament, and systematic and progressive reductions in nuclear weapons are at a standstill; rather existing arms control treaties are being abandoned and the remaining strategic arms reduction treaty between the Russian Federation and the US – New START – will expire in February next year unless renewed. In addition, new nuclear weapon systems are being developed and nuclear doctrines changed to lower the threshold of use of nuclear weapons.

As for new nuclear supply arrangements requiring full-scope IAEA safeguards and legally binding non-proliferation commitments, the US-India nuclear cooperation agreement of 2005 and the 2008 Nuclear Suppliers Group approval of an “exception” to supply India with nuclear items (also disregarded India’s non-compliance with UN Security Council resolution 1172 (1998) following its nuclear detonations in May 1998) – both actions were and remain in express violation of principle 12 of the 1995 principles and objectives (that was reaffirmed in 2000).

The resolution on establishing a zone free of nuclear weapons and other weapons of mass destruction in the Middle East also remains to be implemented; rather the three co-sponsors – Russian Federation, UK and US – are divided with the US at loggerheads with Russia and the Arab States. The Arab States out of frustration have pushed through a process under the aegis of the General Assembly – but the implementation of the 1995 resolution remains within the NPT review process.

The 191 countries that are members of the NPT routinely refer to the Treaty as the cornerstone of the global nuclear governance regime in particular that of nuclear non-proliferation, nuclear disarmament and peaceful uses of nuclear technologies. In this context, at the review conferences in 2000 and 2010 they agreed on additional steps and actions that built on the 1995 principles and objectives for nuclear non-proliferation and disarmament. But these were not fully implemented or were reversed in some cases, thus as a consequence the 2005 and 2015 review conferences broke up in bitter discord over differences on the Middle East resolution and dissatisfaction over the pace of nuclear disarmament – problems that will haunt the next review conference.

Many of the supporters of indefinite extension, including the President of the 1995 NPTREC, now realize that the warnings of broken promises and lost leverage sounded by some delegates in 1995 and in subsequent years indeed have come to pass.

Looking to the Future

Ambassador Christopher Westdal (Canada’s head of delegation to the 1995 and 2000 NPT review conferences, with whom I worked on the strengthened review process and the outcome documents) used to quote William the Silent, a figure in Dutch history, who said that, “It is not necessary to be hopeful to persevere”. That, attitude is what I think is needed as we look to the convening of the NPT review conference scheduled for this year that has been postponed to next year due to the COVID-19 pandemic. Despite continuing oppugnancy in views over the Middle East issue and nuclear disarmament that do not raise hopes for a consensus outcome at the upcoming review conference, it is necessary to persevere in defending the NPT and the implementation of the remaining relevant elements of the consensus 1995/2000/2010 review conference outcomes despite the rejectionist attitudes of some States.

Perseverance in protecting the NPT and consensus commitments requires a number of steps, such as: (1) escaping the politically toxic environment at the United Nations in New York and convening the upcoming and future review conferences in Vienna (as I have argued); and (2) buying time both to recover from the ill effects of the COVID-19 pandemic and to benefit hopefully from a better international political milieu to hold the postponed NPT review conference not in 2021 but in 2022.

Tariq Rauf, board member of Atomic Reporters, is former Head of Nuclear Verification and Security Policy at the International Atomic Energy Agency (IAEA) in Vienna, and former Alternate Head of the IAEA Delegation to the nuclear non-proliferation treaty (NPT) review conferences. He has attended all NPT meetings as an official delegate since 1987 . Personal views are expressed here.