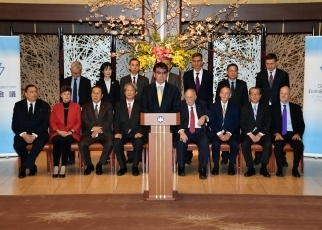 Urgent steps to address crumbling nuclear disarmament efforts and mounting nuclear dangers, will be presented in Geneva, Switzerland, by a group of international experts as preparations get under way 23 April 2018.for the 2020 review of the Treaty on the Non-Proliferation of Nuclear Weapons (NPT).

“The stalemate over nuclear weapons is not tenable,” the Group of Eminent Persons for Substantive Advancement of Nuclear Disarmament (EPG) says in recommendations that urge all States to “reaffirm the understanding that nuclear war cannot be won and should never be fought.”

The Foreign Minister of Japan, Mr Taro Kono, was formally presented with the recommendations on 29 March 2018, by the chair of the group, Prof
. Takashi Shiraishi, president of the Institute of Asian Economic Studies, of the Japan External Trade Organization

“In the recommendations, the EPG views the current situation that two opposing trends in disarmament have come into sharper relief in parallel to the deteriorating global strategic environment in recent years, and that states with divergent views have been unable to engage with each other in dialogue,” Kono said receiving the recommendations
.

“Against this backdrop, the group recommends the measures for the international community to seek for a common ground in which we can pursue a world free of nuclear weapons while improving the international security environment in accordance with Article VI of the Treaty on the Non-Proliferation of Nuclear Weapons (NPT),” he said
.

“The recommendations propose to enhance the NPT review process along with increasing transparency over nuclear arsenals, to develop effective verification mechanisms, and to tackle ‘hard questions’ about the relationship between security and disarmament.”

Atomic Reporters will cover the Second Session of the Preparatory Committee of the 2020 NPT Review Conference being held in Geneva from 23 April to 4 May 2018 with Tariq Rauf providing Daily Reports.