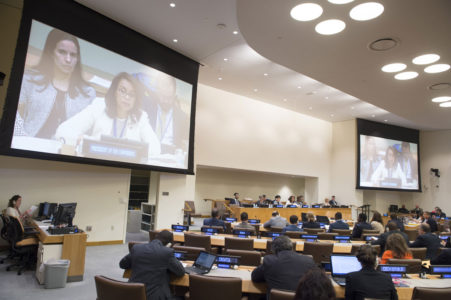 Vienna 29 June 2017 — On Monday, 27 June 2017, the second draft of the “Treaty on the Prohibition of Nuclear Weapons” was released at the United Nations in New York. Delegations from more than 130 States will now work to finalize the treaty text by 7 July 2017

expectations, motivation for treatment, and the presence ofED can result from endocrinological factors (abnormal tadalafil generic.

The United Nations Conference to Negotiate a Legally Binding Instrument to Prohibit Nuclear Weapons, Leading Towards their Total Elimination has been meeting at the UN in New York on 27–31 March and 15 June–7 July. Ambassador Elayne Whyte Gómez of Costa Rica is the Conference President, who has done a masterful job in navigating through the competing and often contradictory positions of both States and civil society organizations (CSO) to produce a realistic and workable draft Treaty text.

The Conference is being boycotted by the five nuclear-weapon States (China, France, Russia, United Kingdom and United States), as well as by four other countries possessing nuclear weapons (India, Israel, North Korea and Pakistan); and by all NATO countries except for the Netherlands, and also by Australia, Japan and South Korea – all of whom rely on US nuclear weapons.

The draft Nuclear Weapon Prohibition Treaty has 21 operational articles and 24 preambular paragraphs. The preambular paragraphs reflect the broad objectives including global concern about the catastrophic humanitarian consequences that would result from any use of nuclear weapons; the unacceptable risks for all humanity posed by the continued existence of nuclear weapons, including from any nuclear weapon detonation by accident, miscalculation or design; the catastrophic consequences of nuclear weapons that transcend national borders, pose grave implications for human survival and for the health of current and future generations, and have a disproportionate impact on women and girls, as well as on indigenous peoples; and any use of nuclear weapons would be contrary to the rules of international law applicable in armed conflict, and in particular of international humanitarian law.

The draft Treaty preamble recognizes that the Treaty on the Non-Proliferation of Nuclear Weapons (NPT) serves as the cornerstone of the nuclear disarmament and nuclear non-proliferation regime. All countries in the world are members of the NPT except for India, Israel, North Korea and Pakistan. It also affirms the vital importance of the Comprehensive Nuclear-Test-Ban Treaty (CTBT) and its verification regime as a core element of the nuclear disarmament and nuclear non-proliferation regime. The CTBT has been signed by 183 countries, but its entry into force is held up by 8 countries: China, Egypt, India, Iran, Israel, North Korea, Pakistan and United States. And, the draft Treaty recognizes the key role of the five nuclear-weapon-free zone (NWFZ) treaties of Latin America and the Caribbean, South Pacific, Asia, Africa and Central Asia, which all together have some 110 member States
.

The draft Treaty also reaffirms the inalienable right of all States to peaceful uses of nuclear energy – in common with the NPT. Prohibition of nuclear weapons is totally different from outlawing peaceful applications of nuclear energy for electricity generation, agriculture, medicine, science and other civilian uses

. Nuclear applications are essential for meeting 8 of the 17 sustainable development goals (SDGs) approved by the UN and in limiting global carbon emissions to below 2% growth.

Article 2 calls on States parties to submit Declarations to the UN Secretary-General of the United Nations on: (a) whether they owned or possessed nuclear weapons or nuclear explosive devices and eliminated all such weapons or explosive devices prior to the entry into force of the Treaty; (b) whether all source or fissionable (nuclear) materials on their territory or under their jurisdiction or control are in peaceful use and under International Atomic Energy Agency (IAEA) safeguards.

Article 3 requires all States parties to maintain safeguards obligations currently undertaken pursuant to international legally binding instruments such as the NPT and NWFZs, without prejudice to any higher level of standards that may be adopted in the future.

Other articles of the draft Treaty concern assistance to victims of nuclear weapon use and testing programmes, unlimited duration of the treaty, and entry into force after 50 States have ratified – this is 10 more than what was required for the NPT.

With only seven working days left before the conclusion of the UN Conference on prohibition of nuclear weapons on 7 July, it is now up to all participating States and CSOs to reach for practical achievable results, to support the President’s draft Treaty and avoid introducing amendments or additional articles. Sometimes “less is more” and this certainly is the case for the nuclear weapon prohibition treaty. Credit must be accorded to the Conference President and States such as Austria, Ireland, Sweden and Switzerland for seeking a practical and realistic treaty. Countries of the Non-Aligned Movement (NAM), CSOs and others should rally behind the President and finalize the draft Treaty pretty much “as is” rather than strive for making the best the enemy of the good!

Tariq Rauf was Head of Verification and Security Policy Coordination at the International Atomic Energy Agency from 2002-2011. Presently he is a consulting advisor with the Comprehensive Nuclear-Test-Ban Treaty Organization in Vienna. Only personal views are expressed here.