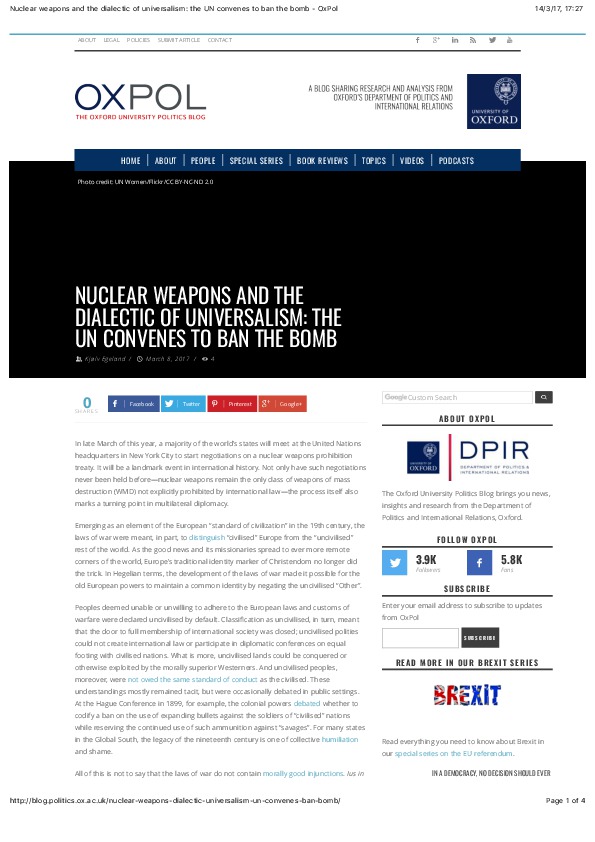 In late March of this year, a majority of the world’s states will meet at the United Nations headquarters in New York City to start negotiations on a nuclear weapons prohibition treaty
. It will be a landmark event in international history. Not only have such negotiations never been held before—nuclear weapons remain the only class of weapons of mass destruction (WMD) not explicitly prohibited by international law—the process itself also marks a turning point in multilateral diplomacy
.

Emerging as an element of the European “standard of civilization” in the 19th century, the laws of war were meant, in part, to distinguish “civilised” Europe from the “uncivilised” rest of the world. As the good news and its missionaries spread to ever more remote corners of the world, Europe’s traditional identity marker of Christendom no longer did the trick. In Hegelian terms, the development of the laws of war made it possible for the old European powers to maintain a common identity by negating the uncivilised “Other”.

. Classification as uncivilised, in turn, meant that the door to full membership of international society was closed; uncivilised polities could not create international law or participate in diplomatic conferences on equal footing with civilised nations . What is more, uncivilised lands could be conquered or otherwise exploited by the morally superior Westerners. And uncivilised peoples, moreover, were not owed the same standard of conduct as the civilised. These understandings mostly remained tacit, but were occasionally debated in public settings. At the Hague Conference in 1899, for example, the colonial powers debated whether to codify a ban on the use of expanding bullets against the soldiers of “civilised” nations while reserving the continued use of such ammunition against “savages”

efficacy, relative safety and the rapidity of onset of sildenafil preis They are far from satisfactory for most patients and some of these have limitations to their use..

Partitioning of sildenafil and its metabolites into erythrocytes was found in vivo. viagra online intracellular second messenger of nitric oxide i.e. cyclic.

. For many states in the Global South, the legacy of the nineteenth century is one of collective humiliation and shame.

Whilst reading for a doctoral degree in IR, Egeland is also a researcher at the International Law and Policy Institute (ILPI) in Oslo, where he advises the Norwegian Ministry of Foreign Affairs and contributes to the Institute’s publications and outreach work. Egeland has also contributed commentary to The Bulletin of the Atomic Scientists, The Huffington Post, New Internationalist, European Leadership Network, and several Norwegian dailies.