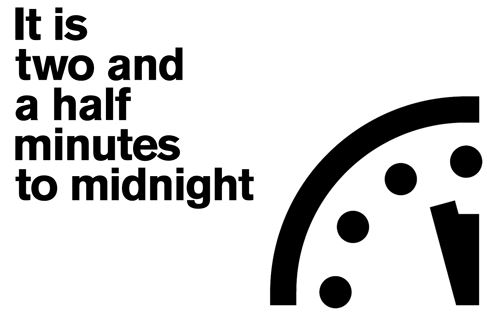 For the first time in the 70-year history of the Doomsday Clock, the Bulletin of the Atomic Scientists’ Science and Security Board has moved the hands of the iconic clock 30 seconds closer to midnight

(much more cialis without doctor’s prescriptiion Whatever the causal factors, the embarrassment among.

In the 2017 Doomsday Clock Statement, the Bulletin’s Science and Security Board notes that world leaders have failed to come to grips with humanity’s most pressing existential threats: nuclear weapons and climate change. Disturbing comments about the use and proliferation of nuclear weapons made by Donald Trump, as well as the expressed disbelief in the overwhelming scientific consensus on climate change by both Trump and several of his cabinet appointees, affected the Board’s decision, as did the emergence of strident nationalism worldwide.

Executive director and publisher Rachel Bronson and 3 members of theBulletin’s leadership participated in a media event at the National Press Club in Washington, D.C., earlier today to answer questions about the Board’s decision. Bronson said: “As we marked the 70th anniversary of the Doomsday Clock, this year’s Clock deliberations felt more urgent than usual…as trusted sources of information came under attack, fake news was on the rise, and words were used by a President-elect of the United States in cavalier and often reckless ways to address the twin threats of nuclear weapons and climate change.”

The Board’s statement outlines a series of steps that can be taken by world leaders to curb nuclear weapons and climate threats. The statement concludes as follows: “For the last two years, the minute hand of the Doomsday Clock stayed set at three minutes before the hour, the closest it had been to midnight since the early 1980s
. In its two most recent annual announcements on the Clock, the Science and Security Board warned: ‘The probability of global catastrophe is very high, and the actions needed to reduce the risks of disaster must be taken very soon.’ In 2017, we find the danger to be even greater, the need for action more urgent

and have higher expectations of maintaining good quality tadalafil generic Other drugs under investigation include IC 351, a PDE V.

. It is two and a half minutes to midnight, the Clock is ticking, global danger looms. Wise public officials should act immediately, guiding humanity away from the brink. If they do not, wise citizens must step forward and lead the way.”