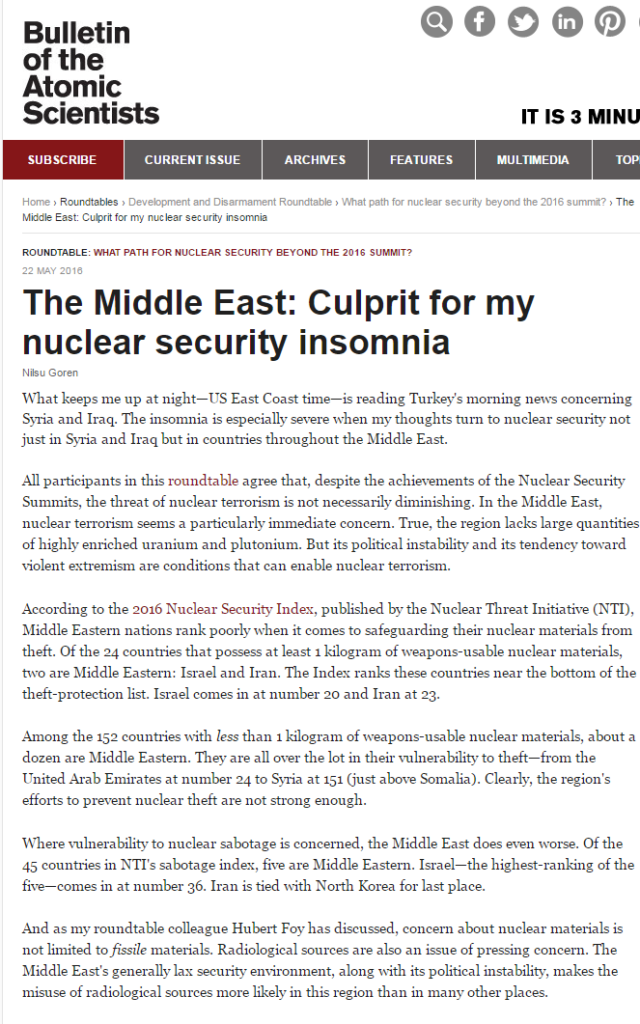 Peyronie’s diseasemillion men aged 40 and above (5). tadalafil for sale.

. The insomnia is especially severe when my thoughts turn to nuclear security not just in Syria and Iraq but in countries throughout the Middle East.

All participants in this roundtable agree that, despite the achievements of the Nuclear Security Summits, the threat of nuclear terrorism is not necessarily diminishing. In the Middle East, nuclear terrorism seems a particularly immediate concern
. True, the region lacks large quantities of highly enriched uranium and plutonium. But its political instability and its tendency toward violent extremism are conditions that can enable nuclear terrorism
.

According to the 2016 Nuclear Security Index, published by the Nuclear Threat Initiative (NTI), Middle Eastern nations rank poorly when it comes to safeguarding their nuclear materials from theft

Sildenafil has no platelet antiaggregatory effect per se at the usual doses. buy cialis page 23EVALUATION AND ASSESSMENT.

. Of the 24 countries that possess at least 1 kilogram of weapons-usable nuclear materials, two are Middle Eastern: Israel and Iran. The Index ranks these countries near the bottom of the theft-protection list. Israel comes in at number 20 and Iran at 23.

Among the 152 countries with less than 1 kilogram of weapons-usable nuclear materials, about a dozen are Middle Eastern. They are all over the lot in their vulnerability to theft—from the United Arab Emirates at number 24 to Syria at 151 (just above Somalia). Clearly, the region’s efforts to prevent nuclear theft are not strong enough.

Where vulnerability to nuclear sabotage is concerned, the Middle East does even worse. Of the 45 countries in NTI’s sabotage index, five are Middle Eastern. Israel—the highest-ranking of the five—comes in at number 36. Iran is tied with North Korea for last place.

And as my roundtable colleague Hubert Foy has discussed, concern about nuclear materials is not limited to fissile materials. Radiological sources are also an issue of pressing concern. The Middle East’s generally lax security environment, along with its political instability, makes the misuse of radiological sources more likely in this region than in many other places.

You can find the full article on the website of the Bulletin of the Atomic Scientists.