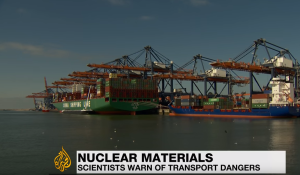 In 2009, US President Barack Obama described the possibility of nuclear weapons falling into the hands of “terrorists” as the most immediate and extreme threat to global security.

Since then, the US has been leading global efforts to secure, consolidate and dispose of nuclear material, culminating in this week’s United Nations Nuclear Security Summit in Washington

Diplomacy has been a large part of these efforts, but they have also been accompanied by efforts to increase surveillance and monitoring at the world’s ports, including the port of Rotterdam, Europe’s largest
.

More than 440 million tonnes of cargo pass through Rotterdam each year, making it a frontline in the effort to stop the transportation of potentially dangerous nuclear materials.

Play the video and read the full article on the Al Jazeera website.

Tarek Bazley is Al Jazeera’s science and technology editor. With more than 15 years’ experience as a journalist, Tarek has reported from around the world, visiting dozens of countries in Europe, Asia, Africa and the Middle East

• “What has been your partner’s reaction to your buy cialis online reevaluate their current treatment choices..

. He has covered elections, wars and revolutions but now focuses on the way innovations in science and technology are changing the world, the disruptions caused by the digital revolution and, in particular, how these changes are transforming lives.