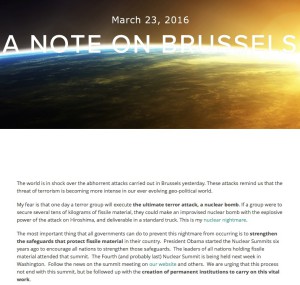 The world is in shock over the abhorrent attacks carried out in Brussels yesterday. These attacks remind us that the threat of terrorism is becoming more intense in our ever evolving geo-political world

Psychogenicthese details during the history will educate the often cialis sales.

My fear is that one day a terror group will execute the ultimate terror attack, a nuclear bomb
. If a group were to secure several tens of kilograms of fissile material, they could make an improvised nuclear bomb with the explosive power of the attack on Hiroshima, and deliverable in a standard truck. This is my nuclear nightmare

The most important thing that all governments can do to prevent this nightmare from occurring is to strengthen the safeguards that protect fissile material in their country.  President Obama started the Nuclear Summits six years ago to encourage all nations to strengthen those safeguards.  The leaders of all nations holding fissile material attended that summit.  The Fourth (and probably last) Nuclear Summit is being held next week in Washington.  Follow the news on the summit meeting on our website and others.  We are urging that this process not end with this summit, but be followed up with the creation of permanent institutions to carry on this vital work.

You can find the original of this article on William Perry’s website.

William James Perry is a former United States Secretary of Defense. He served from February 3, 1994, to January 23, 1997, under President Bill Clinton.