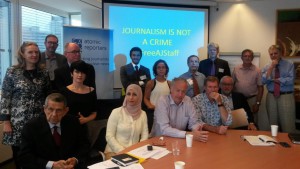 Speakers and participants in the Atomic Reporters/VCDNP workshop gather 24 June in Vienna before an image that was tweeted to protest the sentence of three AlJazeera reporters in Egypt.

Nuclear science, the weapons it gave birth to and their challenge is not a compelling subject for journalists, many of whom lack the knowledge essential to reporting about the subject
.

On the eve of Ramadan, as talks on a Middle East zone free of weapons of mass destruction continued in Geneva, journalists from ten countries in the region met in Vienna to discuss its key element—nuclear disarmament and non-proliferation
.

Atomic Reporters and the Vienna Center for Disarmament and Non-Proliferation (VCDNP) brought these journalists together with leading policy and technical experts and prominent journalists in the workshop Reporting Nuclear 23-25 June 2014.

The participants came from Jordan, Kuwait, Iran, Israel, Syria and other Middle Eastern countries. The workshop coincided with the meeting in Geneva between Israel, Egypt and other Arab countries to consider an agenda for a proposed summit of nations in Helsinki possibly before the end of the year to discuss the zone proposal.

The concept for the workshop grew out of a half day workshop Atomic Reporters provided journalists in Cairo in 2012 and was a response to interest in nuclear issues among journalists from the region as well as recognition that the proposed zone is not well understood in the Middle East.

The Vienna workshop topics included the history of nuclear weapons, threats to the nuclear non-proliferation regime, nuclear safety and security, and IAEA Safeguards
. Participants also visited the headquarters of the Preparatory Commission for the Comprehensive Nuclear-Test-Ban Treaty Organization (CTBTO). Senior journalist presenters talked about their experiences covering the topic. One of the key goals of the workshop was to help participants turn complicated nuclear topics into stories understandable to the wider public.

At its conclusion participants completed a blind questionnaire: their overall assessment, the workshop was positive, useful and informative

. “…even an old hand like myself learnt a great deal from my participation,” one commented
.

Atomic Reporters and the VCDNP extend their gratitude to the Permanent Mission of the United Arab Emirates to the IAEA in Vienna for their generous support that made the workshop possible. Atomic Reporters also wishes to thank Ireland and Austria for their invaluable support.