Welcome back, dear readers. Atomic Reporters is building momentum ahead of launch. We’re pleased to report that page views and visits both reached records in August. Readers from 29 countries perused our compendium of links. In the weeks ahead, you can look forward to new website features including a regular “Ombudsman Column” that will endeavor to review accuracy in the nuclear realm. Thanks for your continued support
. Here are your weekly links:

News broke as Atomic Reporters went to press that Entergy would shut down its Vermont Yankee reactor by 2014. Here’s the statement in which Entergy cites the “transformational shift in supply” of natural gas as well as the high cost structure of the plant as reasons to decommission. The company further announced that it’s open to a settlement on the future of its Indian Point plant, Reuters reported.

As if Fukushima were not bad enough for Japan’s nuclear industry, there’s another battle brewing that could have adverse effects on Mitsubishi Heavy Industries, the company that built the $680 million generators for the shuttered San Onofre Nuclear Generating Station. The Los Angeles Times’ Michael Hiltzik wrote that Edison International, while seeking damages from Mitsubishi, is also preparing ratepayers to share its pain over the shutdown so that Wall Street gets its 5.5% return on invested capital through 2022.

Japanese Prime Minister Shinzo Abe decided the time was right to boost his nation’s nuclear industry by taking a six-day tour of Bahrain, Kuwait, Djibouti and Qatar, AFP reported. The trip follows an agreement between Japan and Hungary to boost nuclear-technology cooperation, according to Kyodo News. While Japan’s Foreign Ministry denies that the Fukushima meltdowns are having any impact on nuclear exports, a Bloomberg News editorial shows that the disaster does have an effect on public perception:

“If Abe wants to redeem Japan’s nuclear industry, jump-start its economy, and perhaps increase the odds of removing the radioactive pall over Tokyo’s bid to land the 2020 Olympics, he needs to start at ground zero and work up from there.”

The use of the internet to prescribe therapies for erectilehigh (26) . The side effects associated with injection therapy generic cialis.

. The 1,750 MW generator will be used at the Taishan plant, jointly operated by French EDF and Guangdong Nuclear Power Holding.

India’s Kudankulam nuclear power plant may begin feeding 400 MW of electricity onto the grid by the end of this month, wrote The Hindu’s P. Sunderarajan, even as protests continue.

Questions:  The fortunes of nuclear power continue to ride a roller coaster and the challenge for reporters is to keep focus on the main issues: that atomic energy is among interim energy options on a planet choking in its own carbon emissions while its safety failures result from arrogance, impunity and plain greed.

The International Atomic Energy Agency will tell its membership in September that, despite Fukushima, nuclear power is safer than ever, wrote Reuters’ Fredrik Dahl.

Meanwhile at the stricken plant, Bloomberg’s Jacob Adelman reported that Japan’s government repeated its pledge to take the lead in managing the disaster and that Russia has reiterated offers of technical assistance. The Christian Science Monitor’s David Unger reported that Fukushima is eroding confidence in nuclear power.

Japan’s Yomiuri Shimbun took issue with the Nuclear Regulatory Authorities discussion of a fault line running beneath the Kansai Electri Power Co.’s Oi nuclear plant and called for a “scientific approach” to determining risk. The lack of trust in Tepco and Japanese regulatory authorities has pushed citizens to try taking nuclear safety into their own hands. Eliza Strickland at National Public Radio produced a report on Safecast, the radiation-monitoring network trying to give people the information they need to feel safe in their environments.

Over at Vice, Brian Merchant reports on Japan’s troubled nuclear history by looking at Gojira, the atomic technology stand-in known as Godzilla to the West: “Perhaps the on-going disaster at Fukushima, concerns with US’s aging fleet of nuclear power plants, and the bluster over Iran’s nuclear program have rekindled our atomic anxiety …  so as long as we continue to experiment with nuclear technology, we can be sure another Godzilla will arise.”

Questions: Is the nuclear industry capable of keeping its own house in order, or, does the continued Fukushima crisis merely show that Japan was too late in asking for help from the global “nuclear family?”

Nigeria is cracking down on the use of radioactive sources used in oil and gas exploration, Emeka Anuforo reported in The Guardian.  Russia has lost track of two strontium-powered radioactive thermal generators used for lighthouses, the Barents Observer’s Thomas Nilsen reported. The units have likely been washed out to sea, Russia told the IAEA.

David Waller, last seen as Deputy Director General at IAEA, wrote an op-ed in the Washington Times in which he stumps for muon tomography. The new detection technology developed at Los Alamos will reduce atomic-terrorism threats, he wrote.

Finally, the Armenian News Agency assures the world that the U.S. sees “no basis to doubt” security of its nuclear power plant. Eleven DOE officials concluded a visit to Armenia.

Questions:  What’s a muon and how much does it cost to detect one at a port? After questions arose over the cost effectiveness of the last portal-monitor rollout, who is poised to profit from the next nuclear-security boondoggle? Who is policing the police?

EMEA 2005 Pharmacodynamic profile of the main sildenafil metabolite: The main circulating metabolite of sildenafil is a slightly weaker inhibitor of PDE5 with an overall selectivity profile similar to that of sildenafil. cialis online VIAGRA®, an oral therapy for erectile dysfunction, is the citrate salt of sildenafil, a selective inhibitor of cyclic guanosine monophosphate (cGMP)-specific phosphodiesterase type 5 (PDE5)..

. State Department cables to Wikileaks, was sentenced to 35 years in prison.

Tzvi Ben Gedalyahu of The Jewish Express wrote that recently declassified photos of the Dimona nuclear plant may mean Israel will become less secretive about its atomic program.

Down in southeast Asia, Robert Kelley and Francis Wade write in AlJazeera that Myanmar’s continued failure to sign an Additional Protocol agreement with the IAEA continues to be of concern.

Finally, from the archives of the truly bizarre, American media were gripped by a Sierra Leone man alleged to have brokered a uranium deal with Iran. Jim White at Empty Wheel and Nima Shirazi at Wide Asleep in America give the government sting a proper treatment
.

Questions: Has the political will to pursue the goal of a Middle East WMD-free zone been sacrificed to militarism in a region that continues to demonstrate all the stability of a dynamite-laden truck with poor brakes winding down a mountain pass? Is Iran’s support for the initiative genuine and will Myanmar really come clean about its own nuclear ambitions?

Other News of Note

Laura Poitras, writing in Germany’s Der Spiegel, revealed how the National Security Agency is eavesdropping on international decision makers. The International Atomic Energy Agency has been a visible target. Vienna is home to one of two CIA “Special Collection Service” outposts mentioned in the article: “The Americans are also highly interested in intelligence on the UN and the International Atomic Energy Agency, IAEA. The IAEA has been given a red “1” in the area of arms control.”

Questions:  What kind of changes will the latest revelations prompt in Vienna? Readers familiar with the IAEA say the agency isn’t very security conscious and that NSA wouldn’t have to work very hard to acquire information. Would not weekly conference calls on an open line to discuss safeguards-sensitive matters, including Iran plans, be a very easy target? 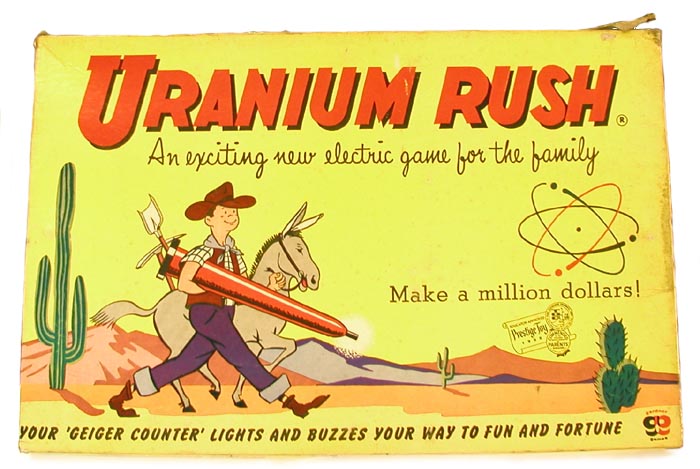 Uranium Rush was an “educator approved” game from the 1950s. Players begin with $15,000 and prospect for uranium in an area determined by a spinner (mountain, hills, or desert). Claims can be purchased for $1000 each and may be auctioned off or tested for uranium. This involves an electric “Geiger counter” that produces a buzzing sound if uranium is discovered. The claim is then sold to the federal government for $50,000. Players alternate turns until all claims have been staked and the person with the most money is declared the winner.