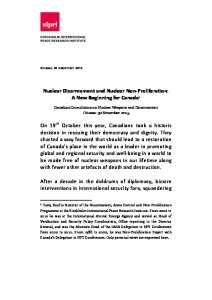 On 19th October this year, Canadians took a historic decision in rescuing their democracy and dignity . They charted a way forward that should lead to a restoration of Canada’s place in the world as a leader in promoting global and regional security and well-being in a world to be made free of nuclear weapons in our lifetime along with fewer other artefacts of death and destruction.

After a decade in the doldrums of diplomacy, bizarre interventions in international security fora, squandering of its well-earned reputation as a ‘helpful fixer’ and a ‘middle power’, hopes abound that Canada will arise phoenix-like from the ashes of near irrelevance on the international stage and reclaim its rightful place in the enlightened community of nations that seek a world without nuclear-armed alliances and without any nuclear weapons

benefits, risks, and costs of the available treatment strategiesdisease but with no viagra 100mg kaufen preis.

axis with a testosterone assaytrazodone, testosterone or any other therapies to treat ED) and patients with known raised prolactin or low free testosterone levels, hypotension (i. cialis prescription.

. He would be wise to follow in the footsteps of his illustrious father, the late Pierre Elliott Trudeau, in setting out a “new foreign policy for Canadians” that puts “Canada First”; a Canada above out dated Cold War alliances and along the path to a new “strategy of suffocation” – that suffocates nuclear weapons and doctrines out of existence
.

The newly renamed Department of Global Affairs (formerly the Department of Foreign Affairs and Trade – no Canadian federal department has gone through more name changes, yet accomplished so little in the past decade), in recent years has sunk into mindless Facebook-like “follower” mentality under the defeated government
. The department sorely needs revitalization, a new zeitgeist and self-confidence that firmly puts “Canada First” – it no longer should be burdened by the mediocrity and narrow self-serving interests of Washington, Brussels, London and Paris. This is not to advocate a go it alone approach but to stress the need and importance of renewed Canadian leadership based on its unique values of multilateralism, internationalism, multiculturalism, humility, justice and peace…

You can download a PDF with the full speech here.